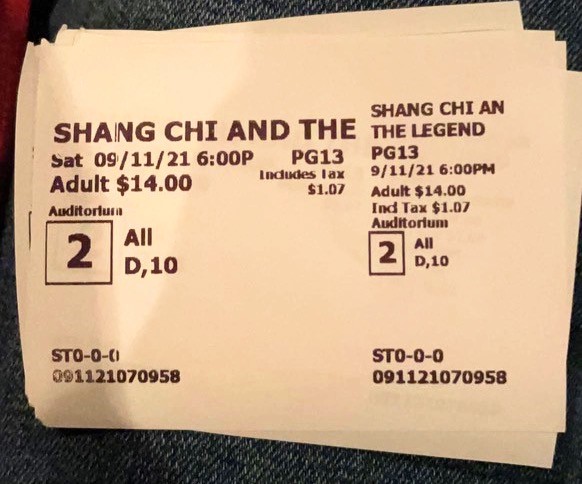 Can’t Wait- Tickets to the Shang Chi movie captured by sophomore Jeunesse Manarang in the movie theater with her dad eagerly waiting for the movie to start. The movie hasn't started yet, but they're almost done with the popcorn.

The lights dim down, and the chair reclines back as you get comfortable. The famous Marvel introduction plays and you are certain that the next two hours will not disappoint.

Marvel is best known for its representation of female superheroes, LGBTQ+ characters and people of all colors in their comics and films. Kevin Feige, the president of Marvel, advocates for diversity to be the norm in Hollywood.

“Shang Chi and The Legends of the Ten Rings” is an adventure/action film part of phase four in the Marvel Cinematic Universe. Phase four is the next phase after “Endgame” featuring all the movies and TV shows released this year and throughout 2023. The long awaited “Shang Chi” indulged fans like junior Samantha Lee and senior Richard Lin with its mixed martial arts fighting styles, unique scenery and comedic lines.

Lee enjoyed the mixed martial arts fighting scenes in the film. The fight scenes were choreographed by Andy Cheng and Brad Allen, the stunt coordinator.

“I was so excited to see “Shang Chi” in the movie theater and when I did, the movie did not disappoint,” Lee said. “It was so interesting, and there was so much action.”

“In terms of Shang Chi, I did watch it- I thought it was pretty good in the sense that they tried to cast Asians and portray some diverse narrative,” Lin said.

The release of “Shang Chi” holds significance for Asian Marvel fans because it is the first Asian lead in the MCU and one of the only films in Hollywood that casted a predominantly Asian cast and crew. Simu Liu, the actor who plays “Shang Chi”, told BBC reporters the empowerment of receiving an important and well known role considering the lack of Asian actors in Hollywood.

“It’s important to me because I’ve never seen an Asian superhero, and it’s really nice to see someone who looks like me be the main protagonist,” junior Hanako Yokoi said.

For fans like Lee, having representation is important to her especially since she didn’t experience it growing up.

Sophomore Jeunesse Manarang said the recurring of the same Asian actors simply demonstrates the absence of actors to represent for the Asian community.

“It’s sad that we see the same actors in these two movies because of how little Asian representation there is in the movie industry,” Manarang said.

Yokoi agrees with Manarang about the failure of inclusiveness in Hollywood.

“Hollywood lacks Asian representation and there’s a big overlap between the cast of Crazy Rich Asians and “Shang Chi” and that says a lot,” Yokoi said. “It would be nice to have more Asian actors.”

Although the movie was only released in theaters, the responses from fans and media did not disappoint. The film broke box-office record during Labor Day Weekend. After opening weekend, “Shang Chi” and the Legends of the Ten Rings earned $94 million domestically.

“I think that this movie will inspire more Asian actors to rise into fame since they have more role models to look up to,” Yokoi said “This movie could also influence the film industry to start hiring more and more Asian actors after seeing the success rates of Shang Chi.”