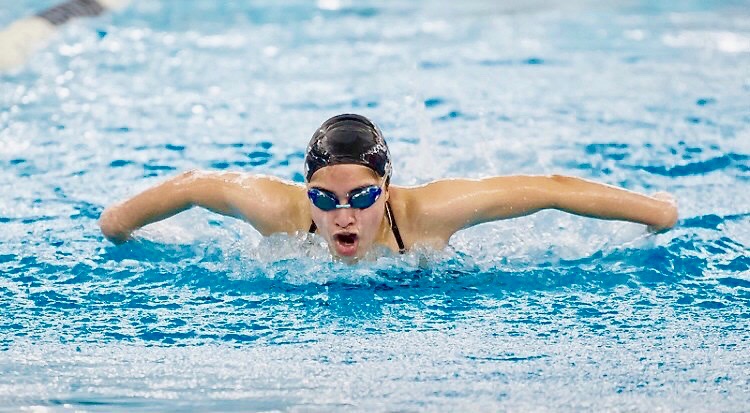 Giselle Garza wins second place in her heat on a 100-meter butterfly stroke at the “Cardinal Classic”. The race was hosted at Lamar High School.

In 2009, Giselle Garza was like any other 5-year-old girl, playing with dolls and having tea parties with her stuffed animals. Until everything changed in 2010.

Diana, her mom, enrolled Garza, 6, in swimming lessons at the YMCA. Diana did this because it could save her daughter’s life one day. She noticed that her daughter was truly dedicated to learning how to swim and had the discipline to work hard.

“I put her in swimming lessons because I wanted her to learn how to swim so that she wouldn’t be scared of the water,” Diana said. “I thought it would be fun and she would enjoy it once she learned how to swim”

From the start of her first lesson, Garza knew that her dolls would be replaced by pool toys. Her new definition of fun now involved goggles and swimsuits.

Garza, now a junior, swims for the Harris County Aquatics Program and Bellaire’s school team. She practices two hours a day, Monday through Friday. And even though her practices make her tired or sore, her improvements in the pool make up for it.

“Giselle is fast and honestly. It’s scary,” said junior Mackency Moreno, teammate. “I would probably cry if I had to swim against her because she’s so serious.”

Through the years, Garza has competed in Bellaire and club meets, in which she has won several awards, including second place in her heat on a 100-butterfly stroke at the “Cardinal Classic.”

Despite her training and skills, she still experiences fear. She worries that her goggles will fall off, she will experience a false start during a relay, get disqualified or forget what lap she is swimming. She combats this by thinking about the end result. She remembers she is doing what she loves.

“I do get scared sometimes, but I just kind of hope for the best and try to have confidence in myself,” Garza said. “I prepare myself mentally to avoid any of these things from happening.”

“One of my worst moments I experienced as a swimmer was when I was swimming a 100-meter breaststroke,” Garza said. “I got first place but I got DQ for doing a ‘scissors kick.’ It was one of the worst moments because even though I got first place, it didn’t count since I got disqualified. I was bummed out about it.”

COVID-19 interrupted Garza’s journey. The Harris County Aquatics Program and Bellaire’s swimming program shut down in March of 2020 and did not open until Dec. 10. Garza said she lost some of her endurance because she had not been swimming, and without a pool, she could not practice outside of school.

She hopes to swim her senior year and in college. Her devotion and work ethic are what make Moreno believe in Garza.

“She loves swimming so much that I wouldn’t be surprised if she swam for a college,” Moreno said. “She is always trying her best, even with sets we don’t like, and this really shows how passionate she is.”

Garza’s mom believes in her, as well.

“I’ve seen her grow both in the pool and out,” Diana said. “She’s grown to be a better swimmer, of course, but also, it’s pushed her to strive for what she wants and to make her more determined.”

Garza said her experiences in swimming have put her in a position where she can encourage others to join the sport.

“It is an essential life-saving skill and a very fun sport,” Garza said.  “And not only that,  but swimming makes me feel astonishing. The fact that I get to race people and impress others by winning makes me view myself as a champion. It really motivates me to challenge myself and improve even more so that one day my parents can clap for me, not for winning a typical school competition, but for standing on a podium for winning an international competition. I wouldn’t trade swimming for anything else.”