Students reflect on March 12, one year since normal school 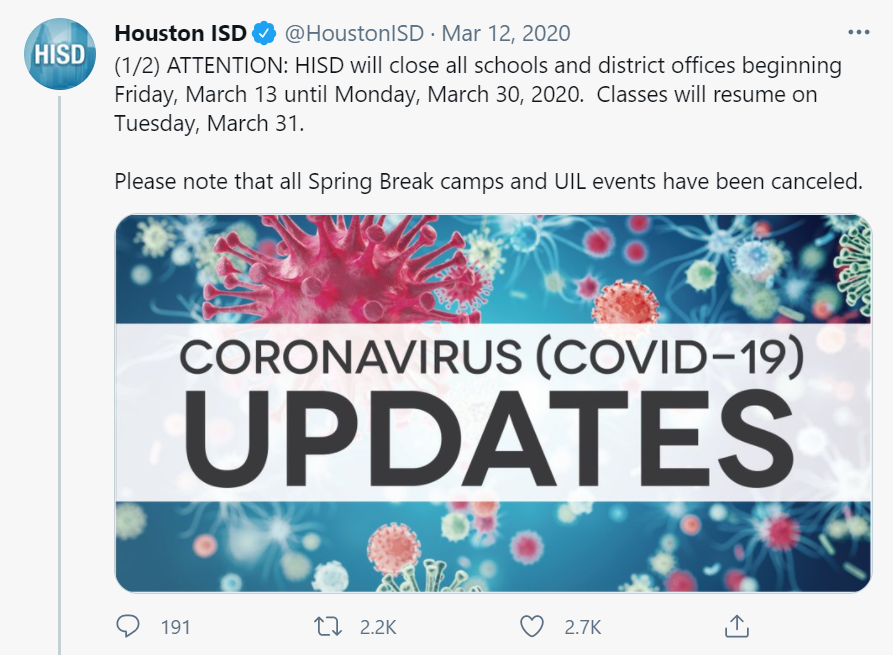 HISD tweeted this message out on March 12, 2020. Exactly a year later, HISD schools have still not returned to 100% in-person learning.

Like every other junior that day, Claire Claypool attended her usual classes on March 12, 2020 — English with Ms. Humphrey, US History with Ms. Good and French with Ms. Florian — not knowing that that was her last day eating breakfast with her brother before leaving for school, walking through the main hallway to rush to her classes, waving at familiar faces that pass by in a crowd of students. This was the last day of normal high school for Claypool, but she didn’t know it.

Her day ended with Belles, and she headed to the cafeteria for practice.

As the team ran the competition routines for an upcoming contest in two weeks, Claypool and the other officers called a water break. When she and others grabbed their phones, they read this HISD tweet. “ATTENTION: HISD will close all schools and district offices beginning Friday, March 13 until Monday, March 30, 2020.  Classes will resume on Tuesday, March 31.”

“I remember we all saw the tweet from HISD and we ran in to tell our coach because the competition we had been practicing for fell during those three weeks which meant that we wouldn’t be able to go anymore,” Claypool said. “So, everything we’ve been practicing for was for nothing and it was a really awkward and a really sad moment.”

“That competition never happened so I remember feeling really weird after practice knowing that we had spent all these weeks working on dances we were never going to get to do,” Claypool said. “I also know that we were all at practice when they announced the extended spring break, and our coach decided to give us the officer list then rather than over spring break knowing that we wouldn’t be together for the next three weeks. Usually, we are not together when we find officers so that was really different and unexpected.”

The rodeo was canceled the day before on March 11. Though Claypool’s plans to go to the Luke Bryan concert with a teammate were interrupted, she still viewed the entire situation lightly.

“At the time, I wasn’t super surprised that spring break was extended,” Claypool said. “I didn’t know why we had school canceled the next day because I figured like, what’s one more day? But I wasn’t as concerned about Covid as I should’ve been at that time because I thought it was going to be something like max a couple hundred people will get and it would just go away. I was wrong about that obviously.”

At the same time on the other side of the cafeteria, junior Michael Zhang was playing spikeball with his friends when he also found out the news from a Remind message that let him know that they weren’t coming back for a few weeks after spring break.

“We were pretty happy about it because we had more free time and we were able to go and play Spikeball more,” Zhang said.

Though the news caught some of his friends by surprise, Zhang was expecting something similar to happen.

“I remember Mr. Cothran specifically told us that we would probably not have school,” Zhang said. “So, I was expecting school to get canceled.”

Zhang’s excitement soon wavered when his family’s spring break trip also got canceled due to Covid-19.

“I was planning on going to Alaska during spring break,” Zhang said. “But, because of Covid, we canceled the whole trip – all cruises, all planes, all everything. It was going to be an Alaskan cruise.”

Senior Sean Pappolla was also disappointed when his parents canceled his spring break trip to Boston. Then a junior, he had hoped to visit his dream schools, which included Tufts University, Boston University, Northeastern University and Brandeis University.

“I was sure that school was going to be cancelled, but I don’t think anyone could have predicted what happened,” Pappolla said. “Like most of my classmates, we thought we would simply have a longer break.”

A year later, Pappolla reflected back on the events that have happened since that day.

“At this point it’s not surprising,” Pappolla said. “If you told me a year ago, it would be unbelievable. This has honestly become our new, temporary way of life though, yet this new normal is still crazy if you stop and think about it. I’m definitely spending more time with myself, which is really a good thing. I’ve become more comfortable living my life, but I do miss seeing people as often as we used to.”

On March 12, 2020, Claypool was a junior with SATs planned and a year and a half more of high school to go. Now, she’s a senior committed to Baylor University, with three months left of high school.

“It’s really hard to believe that it’s been a year because it feels like it’s been forever, but at the same time, it hasn’t felt like a year because so much less has happened in my life than what would’ve happened in a usual year,” Claypool said. “I think it’s really weird that I went to normal high school for the last time without realizing it.”