How Living in France transformed teacher 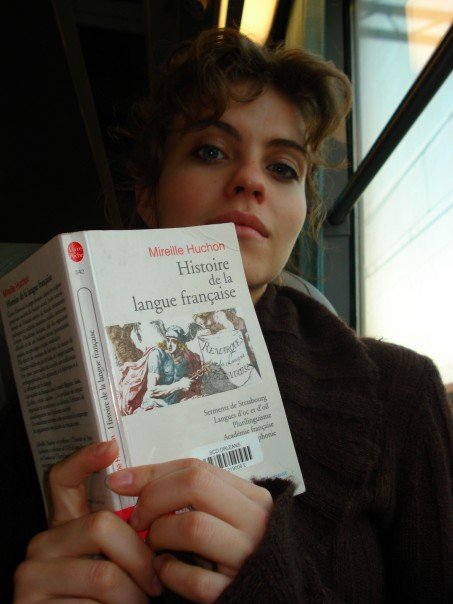 Annilee Newton reads about the history of the French language while traveling on the tram from La Source to Orléans Centre Ville.

With fear and anxiety, Annilee Newton, a freshman in college, embarks on a mission to see the world through a lens greater than that of her small hometown in northern Mississippi.

She plans to learn the language as her first challenge awaits her: finding her suitcase in the Paris Orly Airport in France.

Growing up, Newton’s only exposure to international cultures was her high school French class. She never travelled outside of North America until her mom took her on a school trip to France, which later sparked her interest in a six-month study abroad semester in Orleans.

“I grew up in Mississippi, northern Mississippi,” the AP Literature and French teacher said. “And my first kind of window into anything outside of that pretty small world was my French class. And for my graduation gift, my mom, who also took French in high school but had never been to France, went on a kind of a study-like trip with me, my high school teacher and a few people from the class.”

The trip was unlike anything Newton had ever experienced before, and it encouraged her to commit to a longer study abroad trip in college.

“It just blew me away,” Newton said. “It was the first time I was exposed to being in a place where people weren’t speaking English, and a different way of living. So when I was applying to colleges, I chose a college that had a program where you could study in France.”

Now in her first year as a French teacher, Newton said that her experience in France affects how she teaches her French I class and AP English classes.

“Since it’s my first year teaching French,” Newton said. “I’m remembering what it was like to learn in France. The first foundations of a language are super influential and my experience impacts how I teach. At the beginning I was like a high beginner, and then I became a high intermediate.”

Newton attended the University of Southern Mississippi and graduated in 2008 with a bachelor’s degree in English and French. Newton says her trip in college affected her in a completely different way than her trip in high school did.

“It kind of changed who I was,” Newton said. “I got to learn the language better and learn about a different pace of life. I think that when you learn another language, you get to see the world through a different lens, kind of, and that happened a little bit that first time that I went to visit France but it really happened a lot when I was studying there, and living there. So when I graduated I got a degree in English and French. And now I teach English in French.”

Newton was surprised at how easy it was to get around the city. She feels that transportation was more accessible than in Houston.

“I could walk outside of my dorm, and end up anywhere in the world, without ever having to drive a car. So that was really nice. I would get to the middle of the city and then I would get a train, and in three hours. I could end up in a completely different city. I think that using public transportation and getting around and walking more was way more part of my life in Orleans than it could possibly be in Houston.”

While living in France, Newton discovered more about the slower pace of life. Newton said that less emphasis was placed on what kind of job people had and more on what their hobbies were.

“The cadence of living was a little bit slower,” Newton said. “And people took work a little bit less seriously, and they took what happened outside of work, you know whatever they’re interested in or hobbies were taken more seriously. I mean my identity in France was more like what are my interests.There was just more emphasis placed on parts of a person’s life, that’s outside of their job.”

Newton said that living in a foreign country allowed her to understand that there are several other cultures in the world besides the one she knew.

“In France I realized that all of the ways I thought things were done, were the only ways that I knew things could be done,” Newton said. “And then going to France, I was able to see different ways of doing things, and so that opened up my eyes. I think that was the most important thing I learned about myself, that my life was one way to live. And there are others, which is something probably I knew but I didn’t know it in a concrete kind of a way. I didn’t really understand that I was part of a really diverse, and like, amazing world, until I went to Orleans.”

Newton’s love for cultures and languages attracted her to Bellaire when she was deciding where to teach.

“I knew I wanted to work in HISD,” Newton said. “And so I looked for schools which had good English programs and Bellaire was one of them. I think it’s also because of my experience in France. I mean I think that It’s amazing how many languages you can learn here, like there are so many doorways open to students. So when I sent out my job requests, I knew that Bellaire was the magnet school for foreign languages. And I saw all the different foreign languages that were offered, and I was just immediately infected.”

Newton said her trip abroad gave her the perspective of learning a language from scratch.

“That experience of taking classes in a language I didn’t know very well, and really just how disoriented I felt and how much work I had to put into it has always influenced my English instruction, especially for my ESL,” Newton said. “So, it is always in the back of my mind when I’m teaching in English literature, especially to students who speak another first language and sometimes are in the intermediate area. How I present language and grammar has been  really influenced by my living in France.”