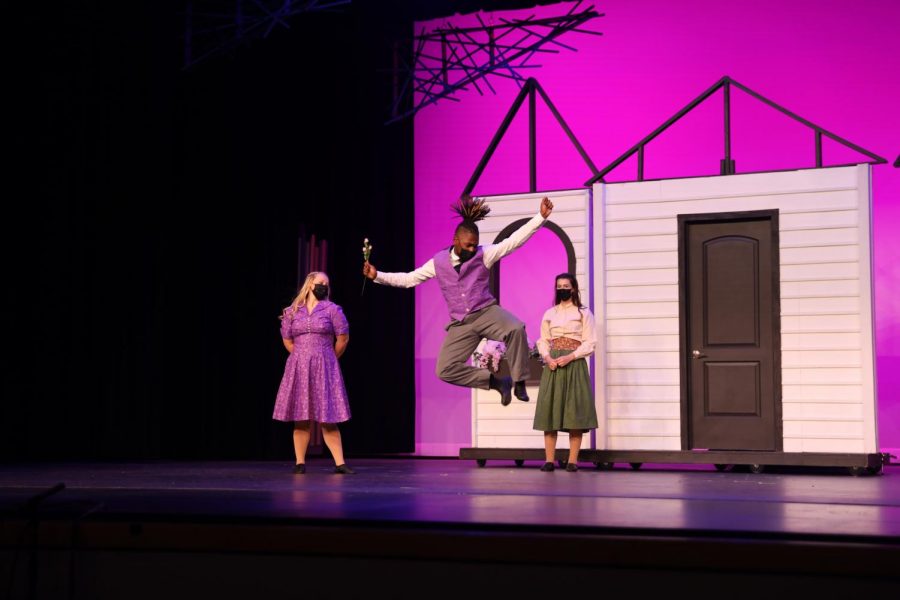 Jermaine Hayden performs in one of his first musical theater shows, Tuck Everlasting May 2021. Hayden did a community college youth program in St. Louis before moving to Houston. "It was a lot of fun," Hayden said, "but there are more opportunities here in Houston so I decided to leave."

In the span of just two weeks, sophomore Jermaine Hayden was cast as one of the leads, Chad Danforth, in this year’s all-school musical, and accepted into the eMotion Dance Company.

“I’m originally from St. Louis, Missouri but I moved to Houston in August so I could have more opportunities to perform,” Hayden said. “I was part of a youth theatre program at the community college in Missouri but that was the only performing opportunity they had besides school. Houston, on the other hand, is so big. Anything you want to do, you can do here.”

Hayden began his performing career as a dancer and said he realized in first grade that he loved performing.

“After participating in the talent show at my elementary school, I joined my middle school’s show choir and choreographed a lot of our couples’ dances,” Hayden said. “One of my best friends that I met from choir pushed me to try musical theater since I really liked singing and dancing.”

So far, Hayden has acted in two musical theater shows.

“I’ve really only done musical theater during this COVID-crazy era because I started in October of 2020,” Hayden said. “It’s weird because, while everyone else has had to adjust to acting with masks and other precautions, this is just my normal.”

Hayden started the year at Challenge High School, which he said was academically sufficient but didn’t have the opportunities he wanted, so he was excited when he saw what Bellaire’s theatre program was doing on their Instagram.

“Everything happened so fast after I decided [to attend Bellaire],” Hayden said. “I got transferred in one day and didn’t really have time to prepare. It was hard transferring in the middle of the school year when friendships and performances were already established. For example, eMotion had already learned a lot of choreography, so I was behind. Luckily, the musical wasn’t cast yet and honestly, auditioning was kind of scary but I just told myself that ‘this is why I moved to Houston so if I don’t do anything, then it’s pointless.’”

Hayden said his favorite part of performing in “High School Musical” is working with a wide range of students.

“We have the dancers, we have the actors, later down the line, we will have the band and orchestra, tech, hair and makeup,” Hayden said. “Everybody puts so much work into one thing and that’s why musical theater is so much fun.”

Hayden is now acting in the school musical, dancing on the eMotion dance team and taking classes at Hits Theatre, adding up to 20 hours of performing time a week – not including the extra hours he puts into practice.

“It is definitely hard to manage everything,” Hayden said. “A lot of times, I find myself mixing choreography because I have to dance for eMotion, the musical and I’m learning tango dancing at Hits. With school, you just have to find small moments to get things done. I do a lot of homework in the car on the way to rehearsals. You just have to stay dedicated because if you don’t have your grades, you can’t perform.”

Senior Jenny Katzen, who is playing Sharpay Evans in Bellaire’s rendition of “High School Musical,” says she plans a lot to make sure she can get everything done.

“I usually look at my weekly schedule with rehearsals and tests and whatever homework I know about so I can plan ahead,” Katzen said.

Katzen said she was really excited when she found out about HSM and has been having a blast so far with rehearsals.

“Sharpay is such a fun character,” Katzen said. “I found out that we were doing HSM over the summer from Red Bird Production’s Instagram. It’s kind of funny because it’s a movie that a lot of us have grown up with, so getting to bring our own interpretations of the characters alive on stage is a really cool opportunity.”

Katzen said her favorite part of performing in musicals is when actors start doing run-throughs.

“I think it’s so cool getting to see the show come alive and seeing all your hard work paying off,” Katzen said.

Freshman and ensemble member Camila Patino also found out about the musical over the summer.

“I immediately knew that I wanted to audition because I love music, “High School Musical” and dancing – it was perfect for me,” Patino said.

Unlike Katzen, who has been at Bellaire for four years and has been acting for seven years, Patino has never done theater before.

“Even though I’m new, I have really enjoyed rehearsals,” Patino said. “The cast seems like a very fun group and I’m excited to see what the future holds.”