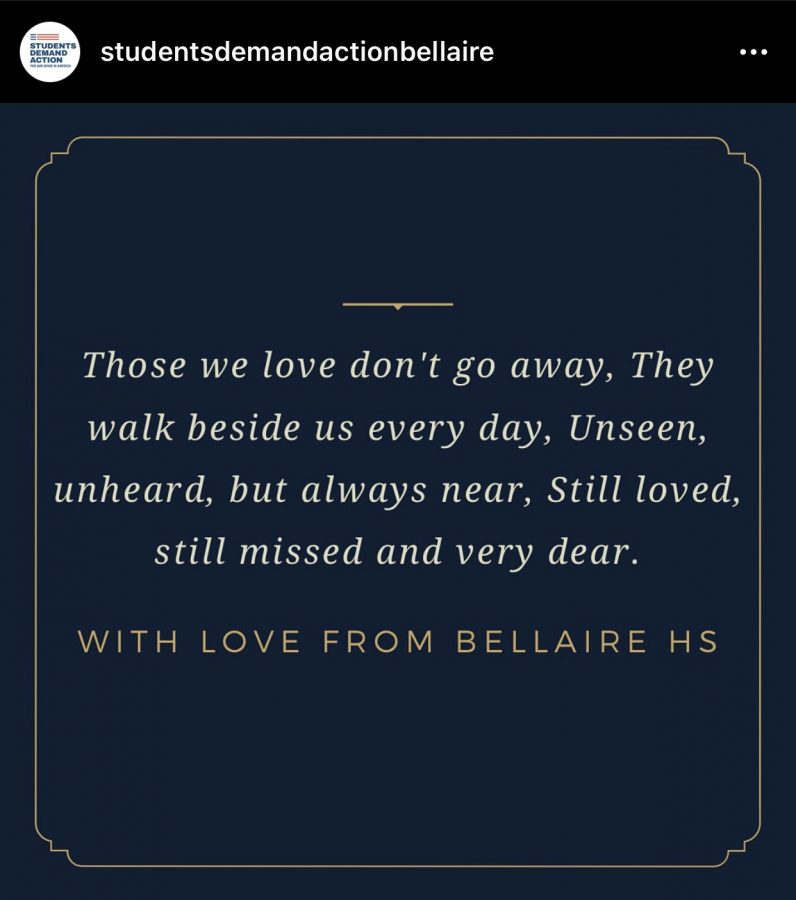 The Students Demand Action club hosted the commemoration of Cesar Cortes as a live speaker event on Jan. 15.

Jan. 13 marked the first anniversary of the fatal school shooting that claimed the life of beloved Bellaire student Cesar Cortes. In commemoration of the tragic day, parents, teachers and students attended a remembrance event at 5 p.m.

Hosted by the Students Demand Action club, an organization dedicated to the prevention of gun violence in schools, seven people spoke at the online event.

“There’s power in this call today,” senior and SDA president Paige Hoffer said. “Because now, even in front of computer screens in our room, we’re leaning on each other like we did a year ago with Cesar’s death. Today, we listen and remember because it is our duty to Cesar not to forget.”

The service included sentiments from Bellaire’s social worker and Cortes’ friends and teacher, who joined hands remotely to offer their words of compassion and condolences for their lost classmate.

“If there is something that Cesar can teach us, it’s that there are people who will listen,” English teacher Meredith Burch said. “So, if there are students out there just know your teachers want to know what you feel and what you see, or what you think you see.”

The day after the shooting last year, thousands of Bellaire students connected by wearing black ribbons on their shirts and shared their words of sympathy at a vigil during Cardinal Hour. The Bellaire community and beyond raised $30,000 for Cortes’ funeral and as a donation to the local JROTC.

“Bellaire is one collective body, you may not believe that because you pass people in the hallway everyday and see a new face,” Hoffer said. “You have no idea who they are or what they’re going through. But, each person you pass, whether you know them or not, is an essential part of this collective body.”

Although the community was physically separated, Cortes’ friends and family united virtually to speak about his passions and aspirations in the activities he loved most.

“Cesar was a cadet in JROTC — he was going to make Bellaire proud by serving his country,” Hoffer said. “You didn’t have to know him to feel the wake of his absence. Without one person, our collective body is wounded. It doesn’t function right. We had a really tough year and the body heals overtime. We’re still healing but ultimately we will always bear a scar.”

Cortes was shy toward others at first, but once peers like Jake Ridenbaugh got to know him, he was funny, kind and a good friend.

“Quite simply, he was great,” Ridenbaugh said. “Cesar was just somebody who you would always want to be around.”

JROTC members spoke of Cortes with respect and admiration, saying positive things about their company commander.

“I know that he’s looking down at us with a big smile across his face, just like he always does,” former battalion commander Alejandro Morales said.

Although Cortes was known for being a bit shy at first glance, he let his sense of humor and charisma shine through in Burch’s class by sharing memes and joking with his classmates regularly. Cortes blossomed into a mature individual, Burch said, who described her experiences with him as a student.

“I feel lucky to have shared moments like that with him and with his friends, and with all of my students that I have had,” Mrs. Burch said.

In fact, during the second semester of Cortes’ junior year, Burch spotted he had finished 250 assigned questions in just 4 minutes.

“I looked at him and I said, well, I didn’t realize that I had a comedian and a genius on my hands. He took it like a champ, and he thought it was hilarious,” Burch said. “To think that a year ago, today, his life was so abruptly taken is really still hard for me to grasp. Thinking about this day is something that I do a lot and I think about Cesar a lot.”

Sharing anecdotes and memories of Cortes with one another after such an incident is vital in keeping his legacy alive and connecting emotionally with other students, staff and community members, Hoffer added.

“Losing him was hard and it affected everybody at our school and beyond our school,” Ridenbaugh said. “For me, it’s been tough. You have to think about it and remember Cesar to move on. It’s good to take this day and remember and reflect on everything and Cesar.”

Donations to the Cesar Cortes Memorial Fund are being accepted. Donations will go toward a scholarship to a graduating JROTC student in honor of Cortes. Students can download and use the virtual background from the Bellaire website to commemorate Cortes’ life.

“We bring meaning to a death that feels senseless by keeping him in our thoughts, our prayers, and our words,” Hoffer said.