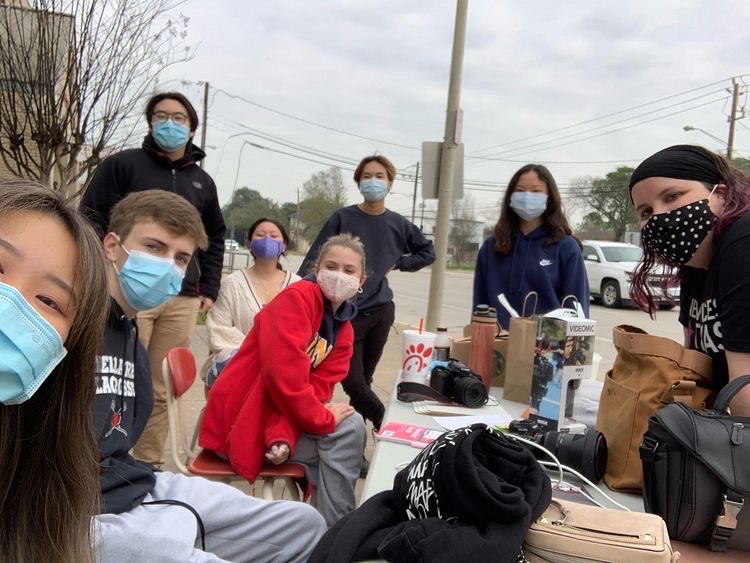 From Jan. 29 – Feb. 1, school clubs and organizations posed for portraits on the corner of South Rice Avenue and Maple Street. Attendees signed up for 15-minute time slots in advance and were met by the yearbook staff upon arrival.

People’s Section Editor and junior Vinh Duong explained that they made adjustments to ensure the safety of the staff and participating clubs. Everyone being photographed stood six feet apart and photos were limited to 10 or fewer officers.

“We wanted to be as COVID-19 friendly as possible, and if we allowed everyone in the club to be present for the club photo, we could not maintain social distancing guidelines,” Duong said. “For example, the Spikeball Club is a huge club with lots of members, and if everyone showed up then we would have to take the picture in a place with more space like the auditorium.”

Due to COVID-19, the event could not have been held inside the auditorium as usual. Additionally, the staff did not use a professional photographer. Instead, yearbook staff members took the photos.

Photographer and junior Henry Pu said the limited group size and space for photos allowed for simpler equipment and framing.

“This year we did not have to use a huge camera to shoot a wide angle,” Pu said. “Normally, in the auditorium, we would have had to rely on a professional, but it was cool to rely on ourselves this time. I felt like we held more responsibility, and we had a lot of good times organizing and directing the event. It felt pretty professional.”

Duong compared the ease of organizing this year’s event to previous ones.

“I was not in yearbook last year, but I could tell that this year, despite COVID-19, was much easier than last year,” Duong said. “We had multiple days to take club photos, whereas before, club photos took place during school and people sometimes had other commitments or places to be which made taking pictures more difficult. This year was easier because we had more time and we were much more organized compared to last year, and we did not have to deal with nearly as many people.”