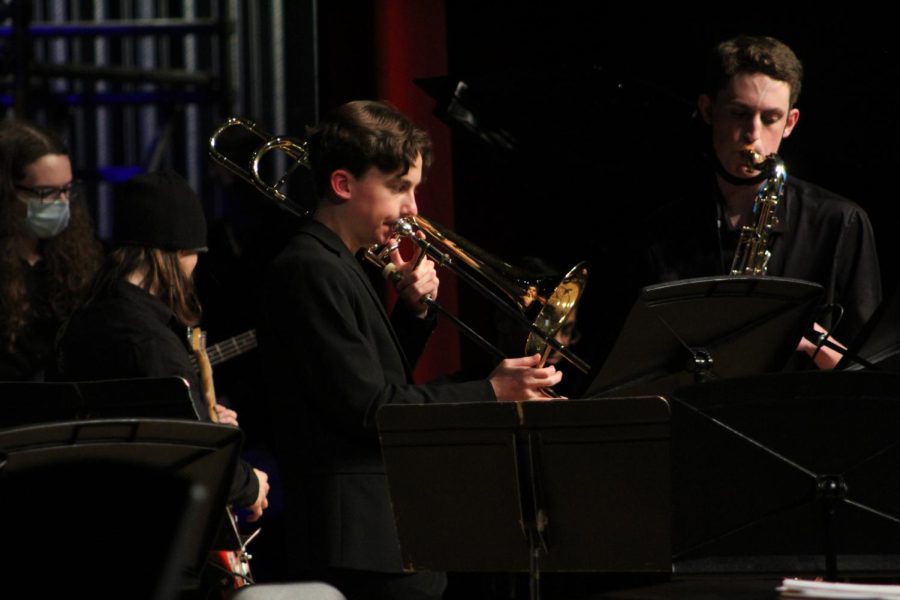 The Mighty Cardinal Band presented their end of year band spring concert. On May 13, the band performed six pieces as well as three jazz ensemble pieces that included an original by junior and Jazz Ensemble member Charlie Truitt.

Assistant band director Zachary Luftop said he was excited for the concert despite the challenges with rehearsal schedules.

“The concert went well and I was excited,” Luftop said. “I was excited to feature Charlie’s song and senior Harrison Mistich. With people being out because of the AP tests, it was hard to rehearse.”

“I think the concert went really well especially considering we had separate symphonic bands play this time, which is something we’ve never had before,” Kapur said. It was a really great addition to the concert and I really enjoyed hearing them play.I really enjoyed this year on band more because there was more of the comradery and the whole group section part of it.”

Kapur said that in the end a lot of practice was put into the concert to master the pieces and that he looks forward to next year.

“A lot of individual commitment was required for mastering some of the parts,” Kapur said. “I hope the seniors have a good time wherever they are going, whether it is college or employment. I know a lot of them are going to come back for our football games so I look forward to meeting them again.”

Senior and drum major Lia Hatvany said she enjoyed her last concert and plans to continue pursuing music in college.

“I am going to miss the family and the connection with band directors because band is a family and nothing is going to take that away,” Hatvany said. “I am double majoring in music and strength and conditioning. I also hope to conduct in the future.”

Hatvany said that band was worth it and will miss all of it.

“Band takes a lot of dedication and it’s definitely worth it because you get to connect with the school at a different level rather than a student that just goes to classes,” Hatvany said. “You also build friendships that are unbreakable, learn so much, and you get to be around like-minded people. It’s worth it. It’s worth joining band, it’s worth going through the experience; you sweat together, you cry together, you laugh together, it’s the whole cliché but it’s family.”