My food back home: nothing compares to spices, smells of authentic Indian cuisine 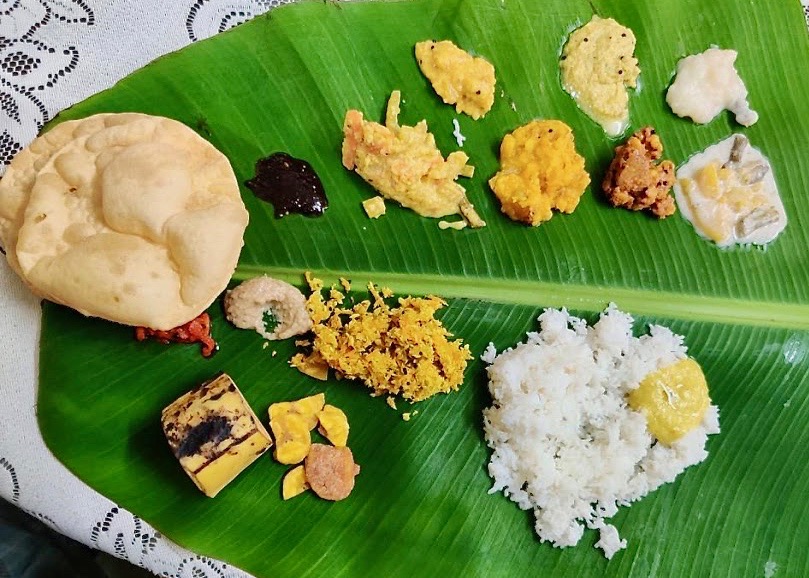 ‘Onam Sadhya’ is a feast that South Indians have during the festival ‘Onam’. Panicker’s great-grandmother feels accomplished by the creation of a feast she spent hours creating.

I remember the joy of growing up on those streets in India. The thrill of waking up early in the morning on a small master bed and waiting until noon to hear the soft chimes of a food stall drawing closer and closer with each second.  As soon as I heard them, a single thought would cross my mind. A simple thought, yet enough to make my mouth water.

“What will it be today?”

Yet, all I feel now is disappointment and shame. Disappointment of how I can no longer relish the heavenly and intense aroma of a classic indian food stall. And shame that I have grown less appreciative for the street food that I grew up with. But even with these emotions, I can still keep a saving grace. Something that, just for a moment, sends me back to the narrow, debris-filled streets of India. And gives me a chance to relive the astounding yet baffling experience that was Indian street food. That saving grace is my memory.

The paveways in India were always cracked. There were rocks and debris strewn all over the paveway and main rodway. The apartment I lived in was connected by one of these paveways, leading out to a thin slice of road on which vehicles constantly bustled. Between the boundary of the paveway and the road stood a single food stall. There was nothing special about this food stall, it was shabby looking, had an old grandmother behind it who cooked the food and a rusty ‘fresh ingredients’ sign hanging from it’s top. It was like every other food stall that I had seen.

What made it stand out was the time of day. It was noon. People had just gotten back home from their jobs and school.

And they were hungry.

Men, women and children gathered hastily around the food stall. An aroma so strong and intense was instantly sent up into the air that it would burn your nose hairs and pull you in at the same time. The crowd gathered. The old lady behind the stall began to slowly increase the prices as everyone else bit into the tender and soft bun of a vada pav.

And I simply stood there, five Rupees in hand, watching a crowd of 30 slowly tear into their vada pav.

The aroma that the stall created was one of a kind. You couldn’t replicate it, not in your wildest dreams. The sour scent of lemons being squeezed, mingled with the popping sound of a corn being fried. The pungent smell of pav bhaji being made as butter sizzlingly melted on a frying pan. The feeling of biting into the soft cone of a samosa as its inner filling pleases your taste buds. It was one of a kind. Food unlike any other.

Was it good for you? No.

Did it look any good? Definitely not.

But did it taste incredible? Absolutely.

The food from that stall was unhealthy, I knew this. I knew better than to believe a rusty old ‘fresh ingredients’ sign hanging from the top of an already shabby food stall. But I didn’t care. No one did.

I ordered the food and it was served in under 15 minutes. It looked terrible. It was greasy, with the samosas’ filling leaking out of the side, and it was definitely overpriced. But people paid and gobbled it down.

Compared to the food stalls, restaurants felt like they were a luxury for the rich. To say that there was a distinction between Indian street food and restaurant food would be an understatement.

Tables are always tidy. Floors are always clean. The smell of different foods fill the restaurant’s air, and people are mostly, if not always, respectful. It is a delight to walk into one.

But like all parallels, nothing is the same. Not even the food.

Not to say that food in Indian restaurants is bad. In fact, the food was good, and it was incredibly easy to get a reasonable price and a satisfying meal if you went to one. But compared to the street food, it felt underwhelming.

Restaurant or food stall, there is one commonality between them. That commonality is the spiciness of the food. The food would be incredibly spicy on a good day, and eye-wateringly spicy on a bad one. The only foods that I would not consider spicy are the desserts and the sweets.

Spice has been a major staple in Indian cuisine for as long as I can remember. Red chilli powder, turmeric, cumin and coriander. All of these have been used in foods that I eat on a day-to-day basis. These spices have given me an acquired tolerance and fondness for Indian foods and have made me accustomed to the spices that I taste everyday. So much so that nowadays eating food without spice makes me feel out of place.

But food in India doesn’t just stop at spicy food. Traditions and cultures of each state play a role in their individual foods.  Festivals call for specific kinds of food, and each state specializes in different variations of traditional Indian cuisine.

One of the festivals in South India, known as ‘Onam’, is one that I am the most accustomed to. What connects the festival with Indian, specifically South Indian, cuisine is known as the ‘Onam sadhya.’ This is a feast.

This feast contains a variety of vegetable dishes served alongside rice, banana chips, papadam and south asian pickle. The entirety of the ‘Onam sadhya’ is served on a banana leaf as per tradition. The dishes themselves aren’t quite spicy. In fact, most of the taste is overpowered by the vegetables. But the reason why it works so well is due to the variety and how the rice and pickle compliment that variety. It is customary to finish the entire meal, which might sound like a lot, but is not as hard as it seems.

The rice compliments each vegetable curry given, while the banana chips and pickle slightly sharpen the taste of the entire meal by using spice and salt. After the meal, there is a sweet consolation dessert known as payasam, which is basically a pudding you get by boiling milk, sugar and rice. I personally haven’t been a huge fan of this dessert because it just tastes like sweetened milk. But my dad loves it, so that has to count for something.

Separated from tradition and culture, there are the classics. The most recognizable Indian dishes, the ones that you know you have to taste if you’re visiting India. Butter-chicken with Naan, pani puri and pav bhaji. Come on, you know the ones.

And honestly, you can’t go wrong with any of them. Each will give off a different taste while still maintaining the classic feel of Indian food.  But If I had to pick, I would go for the pav bhaji. It’s the dish that was and has always been at the top of my list when eating street food or going to an Indian restaurant, mostly because it tastes heavenly and partially because of nostalgia.

To my surprise, the Indian restaurants here in the US seem better. This is incredibly baffling to me. Granted, finding a good Indian restaurant here takes a while, but it is worth it when you do. Places such as ‘Saravana Bhavan’ and ‘Godavari’ are my personal favourites, the prior specializing in vegetarian food and the latter in non-vegetarian. And while I do enjoy going to these restaurants, I would be lying to myself if I said I didn’t miss the street food.

Street Food here in Houston is hard to come by, at least for me. The only thing I can consider street food here is the food from food trucks, and even those I have to search for. Occasionally I would run into one at a nearby gas station and the food there was, well, less than desirable. And that fact alone makes me homesick.

I grew up on those streets of India. I grew up relishing the smell of that one food stall that would always be there. I feel disappointed to know that I might not ever appreciate that food like I once did.

But I can keep memories.

Memories of how exotic a samosa tasted right out of the frying pan. Memories of how terrible I used to feel after letting that samosa digest. Memories of how I used to get scolded by my parents for eating the food from that stall. And the memories of going to bed with a huge grin on my face, feeling like a rebel. Satisfied that I had tried, if not enjoyed, something new.

I cherish those memories because they give me a taste of the food back home.