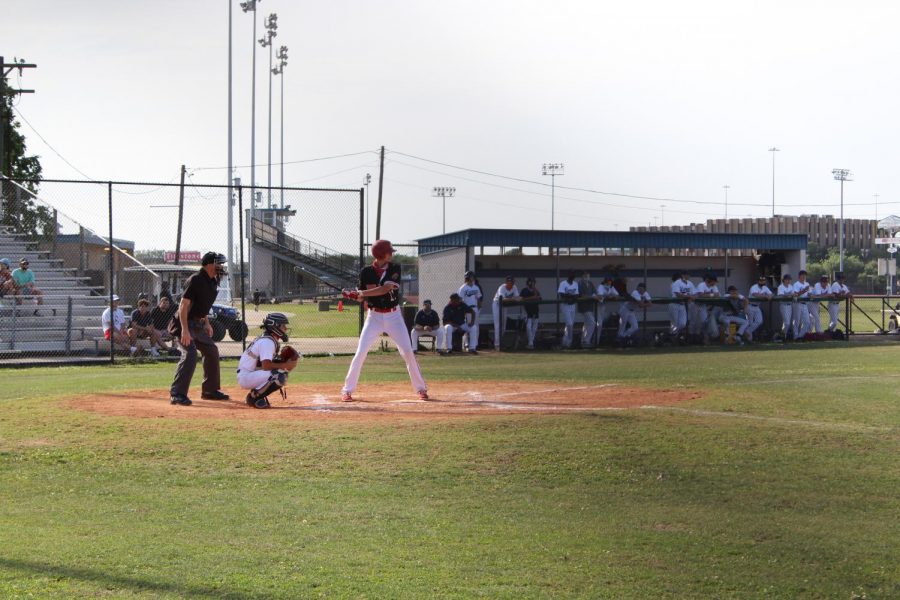 Heading into the 2021 season, most who followed our baseball team closely expected huge years from some of the top seniors on the roster. Seniors Caden Biedermann, Will Russo, and Parker Smith, among others, all played integral roles in their final season.

While expectations were high, nobody foresaw the year that senior starting pitcher Parker Smith would have, especially come crunch time. Smith’s dominance, accentuated towards the end of the season after starting both games of a 2 game series against rival Lamar High School, was the engine and the spark that skyrocketed the squad’s hopes for the postseason.

“Going into that series against Lamar, it was a two team race for the district title. That race was between the two of us. With all of us being seniors, this was the most important two game stretch of my career here. We knew our potential,” said senior pitcher Will Russo.

He speaks for the entire team with that statement, and it never even needed to be said. Everyone in the dugout – players, coaches, and managers knew how big this was. Parker Smith knew it would be him on the bump for that first game of the series against Lamar, the biggest game he’d pitched at Bellaire.

He didn’t shy away from the moment. He rose up. Smith pitched a flawless game, throwing a complete 7 innings game, allowing only 4 hits, one meaningless solo shot in the 6th (with Bellaire already up 7-0 prior), and a ridiculous 12 strikeouts. His fastball reached a velocity as high as 93 mph, and was absolutely untouchable all night. Needless to say, he rose to the moment. Bellaire’s bats did their job, and so did he. It was an all around team effort to secure the win for Bellaire in their first of two games against Lamar in that 4-day span. This was the moment everyone took notice. This team was legit.

With the second game of the Lamar series scheduled for that same Friday, the plan was never for Smith to be able to pitch again. With the eventual rainout of that game, it was rescheduled for the following Monday, making the team’s ace available to throw again. Word having gotten around about Parker’s start the week before, the stands for game 2 were packed. Smith wasn’t phased. He showed up again, going 6 ⅔ , racking up 9 K’s, and leading Bellaire to its season sweep of Lamar and clinching the district championship- one of their big goals for the season.

After clinching the district title, the team knew it was in a great place come playoffs. The week in between their last game against Lamar and the first round of playoffs, they trained hard. 4 hours a day, every day, not one complaint. Everyone wanted to work because everyone had the same goal. When the bracket came out, Bellaire sat atop the uppermost line. The first seed. Yet another one of their season’s big goals accomplished. But the job wasn’t finished, and the seeding was the least of their concerns.

All that mattered was the next game. Game 1 of the first round at Stratford High School. Ace Parker Smith set to face off against Stratford ace and Rice commit, a predictable pitching duel if there ever was one. The game was deprived of many baserunners, as both pitchers handled the lineups extremely well. Bellaire was up 1-0, before an unfortunate bobble on a tag of a stealing Stratford runner left him safe, and a following base hit drove in the leading run for the opposition. The game saw no more runs after that, and Bellaire fell 2-1, going down 0-1 in the series.

Game 2 of the series was the following day, as was game 3, scheduled 45 minutes after the conclusion of the second game, if necessary. Junior Seth Broadwell started the game on the mound, but only lasted 1.0 innings after allowing 4 runs without recording an out in the second inning. His teammates had his back though, responding by scoring 3 runs in the bottom half of that inning to pull the score within 1. Junior Aidan Reichek came in to relieve Broadwell of his duties, executing an incredible relief outing, going 5 innings deep and keeping the Stratford offense at bay, allowing only one earned run, which he, as well as the crowd believed, was largely on the umpire. And he let him know it. After nailing down their lineup for almost the full remainder of the game, the strike zone suddenly shrunk. Reichek was ejected from the game and removed from the dugout after tempers flared following a bad call which unraveled his outing, resulting in 2 more Stratford runs, and ultimately ended his day. Regardless, after some big, strong innings by Reichek, and a scoreless top half of the 7th to the arm of Braden Leonard, the game remained 7-4 Stratford entering the bottom half of the final inning. It was now or never.

With the strongest part of the order due up, Bellaire got going quickly. A string of walks followed by a base hit and even a rare balk started the rally. In the blink of an eye, Bellaire found themselves down only a run with one out. With runners on second and third, another base hit brought the tying run home and advanced the runner on second base over to third. The winning run was 90 feet away. Cameron Solomon sees a few pitches, before pulling the trigger and sending one high to shallow center for the second out, but Bellaire’s third base coach sent Sophomore Ty Diaz from third to home after tagging up, where he was thrown out by the centerfielder to complete the inning ending double play. The sac fly simply was not deep enough. Nevertheless, Bellaire had used an incredible 7th inning rally to tie the game and send it to extras. Nobody thought the game could get more exciting… until it did.

After a second consecutive quick inning from reliever Braden Leonard, Bellaire was due up with the top of the order, game tied in the bottom of the 8th. Junior shortstop Hondo DeLaGarza, already with a multi-hit game, walked up to the plate as the crowd intensely cheered him on.

“Something about Hondo walking to the plate at that moment was different,” said Caden Biederman, “We could feel it, and so could he.”

Hondo took a first pitch ball. He then fouled off two straight pitches to bring the count to 1-2, very much in the pitcher’s favor. Hondo didn’t care. He just wanted his pitch. And he got it. DeLaGarza turned on that very next pitch, the sound of the ball hitting the sweet spot radiating through Knoblauch Field, sending that ball deep to left field and well over the fence. It was gone.

Before the fans could even look back towards DeLaGarza after the ball had landed, he was already executing the most iconic bat flip in Bellaire baseball history. He trotted around the bases and threw his helmet into the air as he approached home plate, awaiting the incredible celebration from every single one of his teammates. His first home run ever, and it couldn’t have come at a better time.

“That’s one I’ll remember forever,” said DeLaGarza, “I knew it was gone off the bat. I just stopped to admire it. You know I had to get that bat flip in there too. Everything was in slow motion.”

As improbable as it was entering the 7th inning, Bellaire found a way to bring the series to a 1-1 tie. Game 3 was win or go home. Coach Ozuna elected to go with Riley Gwyn as the starter, who threw the ball well, but the game got out of reach somewhat quickly. The momentum from Bellaire’s electric win 45 minutes prior seemed to have died. They ended the second game with 6 errors and 3 hits, a statistic that will never translate to numbers in the win column. Game 3 ended on a sliding catch in right field by Stratford, and the incredible season was over.

Regardless of whether or not the team reached the second round of playoffs, this season was one to be proud of. And they were. They swept their district rival in Lamar, and earned the #1 district seed. Neither of those are small feats. While the season ended sooner than they would have liked, the team had much to be proud of. This senior class was a special one, and they were able to accomplish all of these feats in their final season together. That is what meant the most.

“This team was such a huge part of my life these past four years,” said Biedermann, “I love all of the guys on this team and I am sad that this last season is over, but we had a great run. Especially all the other members of this senior class, many are guys I’ve played with for my entire life. That is what made this season so special for me and the rest of us, and it is why it is so hard to finally have to say goodbye.”