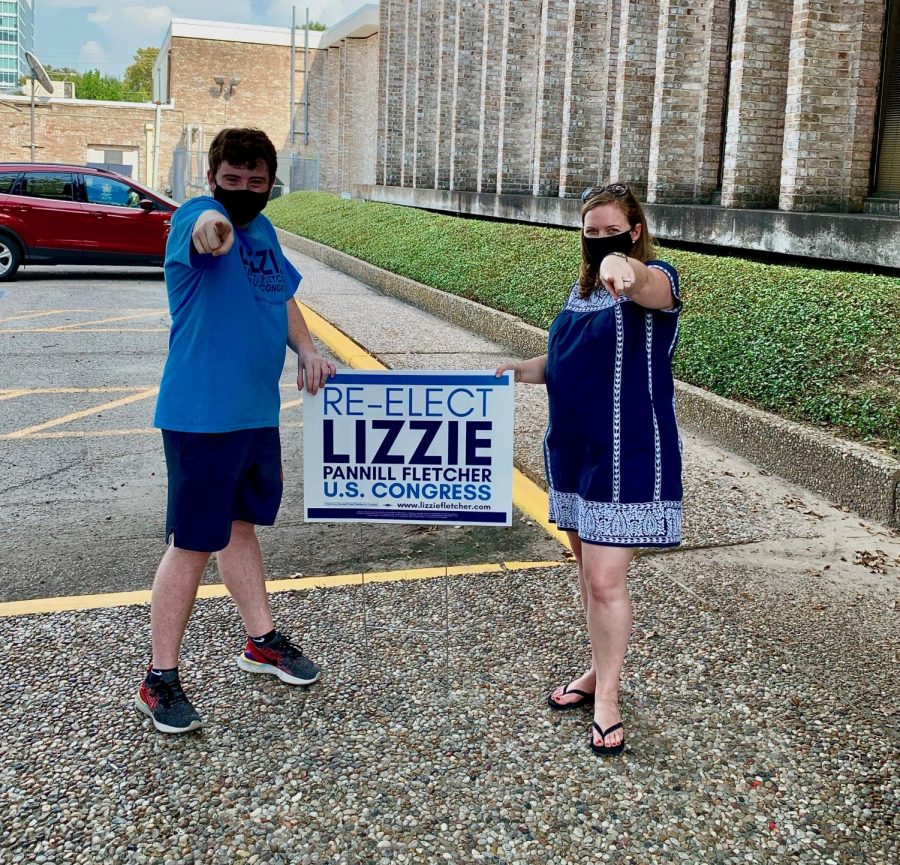 Campaign intern and senior Elan Silberlicht works with Lizzie Fletcher to encourage voters to re-elect her.

What will your priorities be if you are re-elected?

During my first term, my priorities were issues that were critical to our community: protecting and expanding access to affordable healthcare, rebuilding and making our infrastructure more resilient, growing our economy and making sure Houston leads the way to a better future. I’m the chair of the Science, Space, and Technology subcommittee on energy and I also serve on the subcommittee on the environment and the transportation and infrastructure committee. Through that work, I’ve been proud to bring Harvey funding to Houston and a tax to lower prescription drug costs. I will make sure that our energy jobs are included in the PPP, and I will make responding to the COVID-19 pandemic a priority going into the next congress.

What do you suggest to high school students to become more politically active and informed on elections?

Definitely get involved. There are so many ways to become politically active but I think the key is to find what works for you. Whether it’s finding an organization that’s dedicated to helping candidates and their campaigns, or ones that advocate about issues. For students who have a particular passion or interest for getting involved, it’s really important to just get involved with what works best for you and sign up and be engaged. I’ve met with Bellaire students who are involved with Students Demand Action to talk about gun safety, and I talked to other students about global health concerns and animal rights issues. Finding something that you think about and matters to you and then finding other people who share that is an incredibly rewarding way to become active and to stay informed. It’s important to remember that political action is, in some ways about elections, but it’s also about advocacy between elections, like reaching out to representatives by sending letters or emails. When you work together with your friends to do this it’s meaningful, fun and important.

Were there any specific organizations that you were involved with that led you to have an interest in politics?

I was involved in a lot of organizations when I was in high school. I definitely was one of those people who did lots of different things, some of which had more political elements to them. I took a trip in junior year to Washington, which was a really fun week of learning. I continued that interest in politics and the federal government. One of the clubs I was involved in was really focused on women’s reproductive healthcare and rights. I did Model UN and other things that I think were really helpful in shaping my understanding of issues and my engagement with people in the community. It was a great opportunity to get involved in high school.

How many high school students are involved in your campaign and what are their roles?

I don’t have the exact number, but we had tons of high school students and college students too who were interns and volunteers. They do some great work, mostly talking to voters and finding out what they want to know more about and want to see done. They also deliver yard signs and research issues to help us get the word out about our campaign and spread our message. I think the most important thing they do is talk to their peers and educate them about the importance of voting and the elections.

Why should high school students, even those we can’t vote, be engaged and interested in the upcoming election?

We are at a pivotal moment in our country’s history. In the last four years, and especially the last six months, we have seen just how much leadership matters. Everyone we elect, from the White House to the County Clerk, has a huge impact on our lives and I think that this generation will be our future leaders. Even if they can’t vote, they are incredibly influential in who will be elected. It is important to participate in whichever way you can, even if you can’t vote. Everything you do makes a big difference.

What was your previous job before you ran for office? What led to choosing that job?

Before I was elected, I practiced law here in Houston. I worked for about six years before going to law school, but I knew I enjoyed representing and advocating for people. I worked as a lawyer for about a dozen years before I put my name on the congressional ballot. I had the privilege of representing Houstonians from all walks of life in the courtroom, so I thought Congress was just another way to represent them. Being a lawyer really helped me know the people and the issues in the community. It made me better at working with my colleagues and knowing how best to address local issues. Being a lawyer isn’t the only way to get to congress, but it was very useful to learn how to advocate and fight for the people you represent.

Is that what made you want to run for office?

It was really just good training, not necessarily motivation. After the 2016 election, I realized that Houstonians need more representation in D.C. I wanted to bring our community there and bring us more attention.

What is your favorite part about Houston?

That’s a very tough question. I don’t know if I can narrow it down, there’s just so much to love about this community. I think that ultimately what makes it so special is the people who live here. That’s why I’m so proud to represent Houston. We are problem solvers, we know how to work together and I think I’m bringing that spirit to Washington. I also think that the people in this district have really engaged with me and they are so thoughtful and committed to making both our community and country better. I couldn’t be prouder to represent them.

What do you like to do in your free time?

Free time is hard to come by these days, but every friday night I have a Tex-Mex date planned with family and friends. I love spending time with them and just connecting with the community. It really doesn’t feel like work whenever I’m focused on spending time with the community because I consider it such a privilege to be able to represent them and advocate for them.

Are there any restaurants in particular that you enjoy frequently?

It varies every week because we like to rotate which restaurants we go to, but Pappasito’s and Chiles can never go wrong. I really like Ninfas, I’ve been going there for most of my life. There’s just so many great places to choose from, so it’s hard to pick just one.

What is one word voters should think of when they think of your campaign?

Genuine. My campaign and my seeking re-election comes from a place of genuine belief in our community and what we can accomplish. I believe we can lead by example and improve the rest of our country. I believe in the people who live in our community and I’ve seen the great things we can do together. I want to do what’s right for them and I hope that people know our campaign is real and focused on doing what’s best for them and Houston. It truly all comes from the heart.