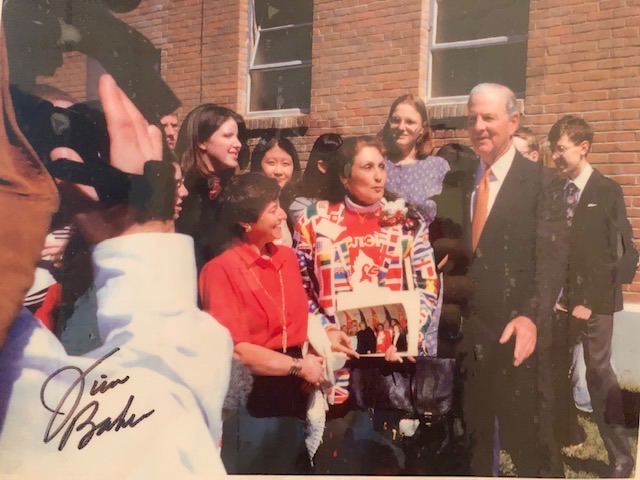 McLendon and her students accepted an invitation to Rice University at the Baker Institute to meet Secretary of State James Baker. Everyone gathers around outside of the school for press photos and to answer questions from reporters.

Everything and nothing has changed for Russian teacher Elizabeth McLendon in the last 51 years. In the 70s and 80s, fashion, architecture and cars evolved, but the quality and personality of her students remain unchanged. For her, the spirit of Bellaire is “the best ever.”

“The student body and faculty are terrific — first class,” McLendon said. “They are supportive and helpful. Who could ask for more? I am Cardinal Proud and I am cherishing each day.”

Reaching a milestone of teaching for half a century, McLendon is no stranger to the effect her influence has on her students.

She describes her teaching style as transformative. She gives students information and they are invited to go out and expand on it. She said it’s much easier now since information is at the tip of our fingers.

“There are ancient techniques and great teachers who say ‘just give me a student who wants to learn— the rest is easy’,” McLendon said. “I would say eclectic and transformational style. I use new methods and preserve the best techniques from the past.”

Recognized nationally as one of the top 120 teachers in America (Thanks to Teachers) by Senator Pell in the Congressional Reception in D.C. in 1990 and awarded Texas’ Foreign Language Teacher of the Year, McLendon’s resume is crowded. Thanks to Teachers invited sponsors to make speeches congratulating the teachers for their hard work and giving them Apple computers and printers to be installed in their homes.

She started teaching at 21 years old in 1963 and one year into her career, she became one of the first Fulbright Scholars to go to Russia while in Houston, one of her most memorable moments she said. The Fulbright Program allows U.S. scholars to lecture and conduct research in Russia. Teaching was her forte.

For McLendon whose roots are planted deep in Bellaire, each student is a joy to teach, but she always felt most welcome at Bellaire. Her two sons attended when they were teenagers.

“Just like me, they walked the halls regularly,” McLendon said. “Jonathan is an NYC entertainer/DJ on NPR Fresh Air and Jason, a mortgage loan closer, is very happily out of the limelight.”

Before moving from Oklahoma to Houston to teach at Bellaire, McLendon taught Russian at Rice University and the University of St. Thomas. In her first years at Bellaire, she taught day classes at Bellaire and night classes at Rice. Being a lead teacher at Rice allowed her to construct her own innovative courses and teach them however she chose. She also supervised and evaluated student teachers at both Bellaire and Rice.

Students who took McLendon’s classes and participated in Rice’s programs accelerated to Level 6 Honors as seniors and she knows one who now works for the National Security Agency (NSA).

McLendon didn’t choose to teach Russian. Her university’s dean suggested she learn the language. While studying Russian, she was chosen as a Defense Department National Defense Education Act (NDEA) Scholar. There were rarely any females in the field — only McLendon and another woman were selected. McLendon realized the treatment between the males and females. The woman and herself had to sign a contract stating that they would participate if they were ‘capable’ and were asked if they planned to get married and have children.

This title, however, allowed her to attend any college she pleased and have all of her expenses covered. This was a bonus for her since she started modeling in college to add to her wardrobe after her parents stopped paying for her clothes. McLendon asked modeling agents to keep the outfits she modeled at fashion shows and photography shoots, including for Seventeen Magazine.

“The problem was my parents,” McLendon said. “I was 17 and they would not sign the release for the covers I shot. They said I was in college to study and learn — not model.”

In 1988, she received her second invitation to be a Fulbright Scholar at Herzen University in St. Petersburg, Russia. Through the Department of State, former President Ronald Reagan picked the top 15 teachers and high schoolers to be sent to Moscow for the first Presidential Initiative exchange in history between the U.S. and the USSR, and the USSR sent their top 15 teachers and high schoolers to Harvard.

“This was not some tourist trip, it was a serious first formal exchange by agreement of two world leaders,” McLendon said. “Everyone at HISD and Bellaire was so proud that they were chosen as one of the few schools picked to be a part of this historic moment.”

Both groups received government funding from Congress, but Armand Hammer provided airfare and spending money. The Marine Band flew in from D.C. to play for the visiting U.S. teachers.

But Russian wasn’t the only language McLendon was passionate about teaching.

In high school, she loved taking Spanish. She took several years of Latin in junior high, but was advanced, and placed into Advanced Spanish Literature and Advanced Spanish Conversation classes in college.

She said this is another reason why she was chosen as an NDEA scholar.

“Someone from HISD came to recruit me in college, along with two other huge school districts: Miami-Dade County Public Schools in Florida and Seal Beach in California where I would be one of many Russian teachers,” McLendon said.

HISD personnel sent former Bellaire principal David McLure to get McLendon from Wisconsin to convince her to come to Houston.

To this day she never regretted her decision. One of McLendon’s greatest accomplishments is being a teacher at Bellaire and due to her teaching and character, she was awarded the Teacher of the Year Award 1989-90.

After her move to Houston, McLendon was also offered another opportunity that reaped benefits.

President George H.W. Bush and Secretary of State James Baker selected her to translate for the Houston Ministerial.

“I was amazed,” McLendon said. “It was one of my greatest honors to be with our top diplomats and welcome them to Houston, but our government was hesitant to ask me to translate since they knew I will always ask to have my students to tag along.”

“I remember lots of TV coverage and print media regarding kids protesting high-level diplomatic talks — just because they were students of Professor McLendon,” McLendon said.

Another event where students came to see McLendon translating was at the International Oil and Gas Conference in Moscow.

“I was translating for Texaco in Moscow while our students were at our partner school there,” McLendon said. “The school brought our kids to the conference and let them see what goes on at these international events. Some of my best teaching moments were when our students were in the geology sections of Texaco and they could ask the employees questions.”

Texaco was interested in following certain students or keeping in touch for college scholarships and for later employment in different countries.

“This event led to discussions about photography and my one-person photography show “Russia Through Eyes of Elizabeth McLendon” is back from traveling for several years through Europe,” McLendon said.

McLendon’s students experienced show travels from the opening in Mosciwzat World Trade Center to Texaco offices. They were provided invitations by Texaco, as well as the U.S. Embassy for the one-person show — an academic partnership with Texaco — in Moscow. All embassies and the public were invited.

“My students were invited to attend, along with the press and Embassy personnel,” McLendon said. “Armand Hammer was a pen pal at that time and asked Houston businesses to give me thousands for my students to go to Russia. I convinced Frank Lorenzo of Continental Airlines to give me and my students free trips to NYC, and then we got breaks from other airlines for busses and meals at airports.”

Another trip was taking her high school students to Rice to meet Michael Gorbachev at Baker Institute.

Although McLendon loved to travel abroad with her students, her last trip to Russia with her class was in 2000.

“HISD stopped trips in 2001 for a while after 9/11,” McLendon said. “Rightfully so, it was considered too dangerous to travel.”

But after flight restrictions loosened, McLendon’s students did continue to pursue college programs in Russia through study abroad programs.

McLendon’s numerous international trips with her students led her to be featured in the Houston Chronicle and The Washington Post as well as being interviewed locally and nationally on TV on CNN, Good Morning America and Moscow local and international news.

“After all of the electronic media our students felt like celebrities,” McLendon said.

McLendon is one of 11 national teachers to develop the Russian AP, now the National Examinations in World Languages (NEWL). They were selected by the Bryn Mawr College Committee for this national project.

Her heart lies not only with Bellaire, but with Houston as well.

“I think I am more representative of the average Houstonian,” McLendon said. “I love helping out in any way I can. Houston Strong.”

During Hurricane Harvey, she worked at Second Baptist Church on Woodway Campus, handling food, unloading nonperishable items from relief wagons and stocking them into food pantries and lined-up cars waiting for food to feed their families. But when it was revealed she spoke Spanish, she was also hired to translate to Spanish-speaking victims and lead prayers.

“That was a wonderful thing to do,” McLendon said. “To pray with families and to give them all the food they wanted, even dog and cat food. That was a beautiful experience: helping thousands I did not know. It’s amazing how the human spirit yearns to help others and how happy we are when we help. Psychologists always knew that, but we are always finding that we are happiest when doing for others.”

“I loved teaching psych and Russian,” McLendon said. “Many of my students took Russian and psychology.”

Teaching will always be her ultimate passion, but she dabbles in her hobbies.

When she was younger, McLendon missed fangirling over movie stars and artists like the Manchester-native boy band group Herman’s Hits that rose to fame in 1964.

“I loved those rock concerts,” McLendon said. “Some other groups popular in the 60s-80s were The Rolling Stones and solo acts Ringo Starr and Neil Diamond. I took my students twice to see Borya (Boris) Grebenshikov in the Heights at Rockefeller’s Houston and then for his 50th birthday tour at the Engine Room downtown.”

She has her role models, but the one she looks up to the most is His Holiness The 14th Dalai Lama.

The meeting required State Department clearance and they met for three days at the World Environmental Conference in Portland, Oregon.

Ultimately, McLendon knows how to balance work and fun when it comes to treating her students.

Her advice to teachers looking to experience fun times with their students while keeping lessons entertaining:

“Kids always know if you love and care about them,” McLendon said. “They all sense how much energy you put into your profession. Love them and teach them thoughtfully and thoroughly each day and they will appreciate you — if not now, some day. Really.”

-Translator for the Bolshoi Ballet Academy for their 1968 Hemisfair World’s Fair Tour in 1968
-Translator for NASA’s Apollo Suyoz Test Flight in 1975 — the first handshake in space
-Named one of the top 10 women by Women on the Move
-Named Oklahoma Ambassador in 1988
-Nationally published writer and photographer; worked for Travel-Holiday magazine in Poland, Kafka’s Prague in Prague and National Geographic writing “Winter in Russia”