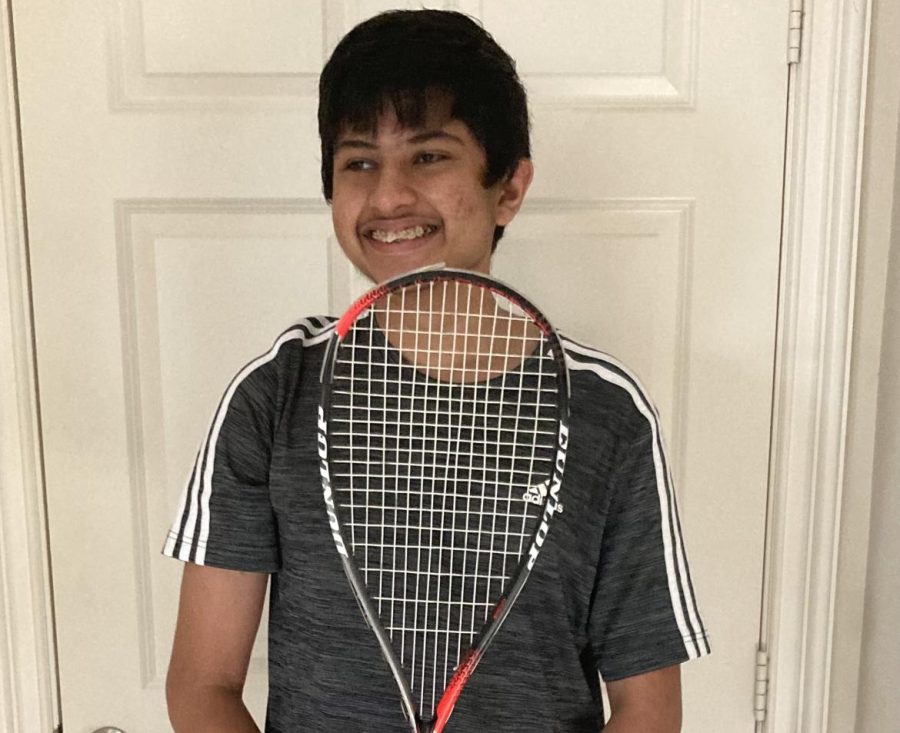 Squash is essentially like an indoor racquet sport where there are two players and roughly a ten by twenty foot court and there’s a small black ball about that can fit within the palm of your hand. The goal is to get to 11 points before your opponent. It’s a best of five game, so if you win three games, then you win the entire match. Generally, you need a squash racket which is much more narrow and has a longer handle than tennis rackets. You will also need glasses, and there’s specific shoes that you need to get for squash. Nothing with black soles because courts can get scratched when you play so you don’t want to leave black marks on the court. Then, spar shoes are characterized by higher traction, because you’re going to be running a lot and taking really sharp turns and breaks and switching direction often. So you need that grip on the floor to make sure that you’re not falling on your face. I started playing squash three years ago. I was kind of on and off at the beginning. I got into it because coincidentally, my sister’s best friend’s brother played squash and their parents made an offhand mention about the sport and my mom was looking for something for me to do and she was like, ‘Oh, you should play squash; you should give it a try’. Then, I fell in love with the sport. It’s a great game, and then for me specifically it puts me in a place where I just feel happier and calmer and there’s a certain rhythm to the game that just chills you out, makes things easier and you forget everything; it just fades to the background. All that matters is between those four walls. I play squash at the Met, a gym downtown. The great thing about the Met was the coaching program. They’ve trained players who’ve gone international to play squash. In 2020 alone, they sent three kids to Hong Kong to play international squash. There’s also this volunteering program at Hog Middle School where they host a program called Mission Squash. It’s composed of roughly 1000 kids from middle school all the way past college, and we basically guide them through the education system in underprivileged communities and give them a fighting chance through the ruthless world of academics, helping them navigate and give back to their communities. I actually want to start a squash club in January and not only connect people to the game, but also tie it back into Mission Squash because one of the areas they’re really struggling in is generating STEM practice questions for some of these student players. This way we can provide a source of volunteering for the Bellaire students while also helping out and giving these kids the resources that they need to succeed. The Met squash community is really tight knit and that stems a lot from the coach. His name is Muhammad Sadiq, and he’s changed my life entirely. I’ve had a completely new outlook about myself and the world as a whole because of my tutelage under him. When I first entered squash, it was at a time when I had a really low self esteem and he really taught me to believe in my worth and believe in my ability to strive and achieve and for him, I’ll be eternally thankful for that and the things that he’s done for me. But definitely with our entire family, the community as a whole just accepted us and brought us into the fray. They’ve helped us out, and I know that whatever my family needs, we can always turn to my coaches there and they’ll be willing to help. I want to create that type of community because I think the awareness about squash is very low and part of that is just the exclusivity of the sport just in terms of how much equipment is needed. It can’t be played outdoors and that hurts its ability to diversify and branch out to different communities. And I think it has, within Houston, a very vibrant and steadily growing community and I want to bring people into that. Honestly, I’m saying this with 100% sincerity: squash is the most life changing thing that I’ve ever done. It’s the thing that I’ve loved the most. And it’s the thing that’s helped me the most, and I just really want people to see that and I think that they can and that they will. There’s just so much love and potential. I love it.