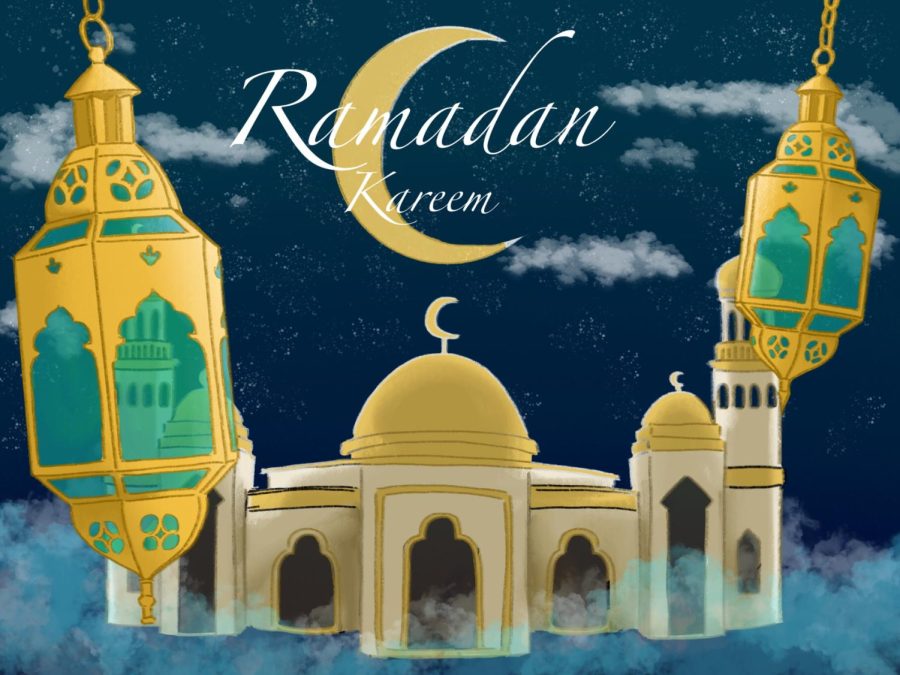 This year, Ramadan began on April 2 and ended May 1. The month of Ramadan traditionally begins with a new moon, marking the start of the ninth month in the Islamic calendar. It’s not only a time of fasting, but also prayer, charity and religious devotion.

Every year, 2 billion people distance themselves from one of the most vital parts of human life: food and water. Yet, during Ramadan, once a month every year, Muslims forego these temptations of the body and mind from sunrise to sundown.

Ramadan’s Arabic root, ar-ramad, means scorching heat. This month of fasting commemorates the revelation of the Quran that the Prophet Muhammad received from the angel Gabriel. The traditions and practices that Muslims observe during this month revolve around this revelation, also known as Laylat Al Qadr (Night of Power).

“First of all, we find out when [Ramadan] starts based on the moon,” sophomore Laith Elkousy said. “We have a lunar calendar to determine the beginning of Ramadan and on the first day, we’ll wake up really early in the morning for something called suhoor and eat a lot of food before the sun rises and drink a lot of water. And then most people will pray the first prayer called Fajr and start their day.”

At the end of the day, Muslims end their fasting after sundown with a sunset prayer called Maghreb, then an evening meal called Iftar, and a nighttime Tarawih prayer, meaning to rest and relax.

“Traditionally, to break your fast at the very end of the day, there are three dates with milk,” Elkousy said. “I think that’s what the Prophet used to break his fast and we follow what he does. It makes sense since it’s high in fructose, something they’re really good for.”

While fasting during the month brings Muslims closer to Allah and their Prophet, meals at the start and end of the days bring families together which is the biggest aspect of Ramadan to junior Hasan Abdullatif.

“Ramadan brings us closer together,” Abdullatif said. “Usually, not everyone is there while we’re eating dinner or lunch. But during Ramadan, we all break our fast together. Even though it’s during school, we go to eat at restaurants or a family’s house to have a huge feast, and we all just become closer together. It’s like Thanksgiving every single night. “

Sophomore Madina Shabanova, who recently transferred to Bellaire from Auburn High School in Washington, said that Ramadan brings about a sense of unity amongst her family.

“Before we open our fast, everyone’s angry, upset and screaming at each other,” Shabanova said. “But, Ramadan brings our family closer together.”

Sophomore Kyce Hakki said the close family bond during Ramadan doesn’t just present itself during this period of fasting, but also throughout the year.

“We always like to do family gatherings during events,” Hakki said. “But, because we have a really big family, it’s hard to get everyone at one place at a certain time.”

Among the challenges of celebrating Ramadan, like organizing the necessary family gatherings, Muslims face the obstacle of preparing themselves physically and mentally for the harsh month of fasting that is to come. For Elkousy, that means eating copious amounts of food beforehand.

“You eat a lot beforehand and hopefully get a little bit chubby right before Ramadan,” Elkousy said. “And that kind of helps. Even though it’s a physical change, it also does help you mentally prepare yourself and reassure yourself: Yeah, I have the reserves for this.”

For Hakki, preparation means reaffirming his faith and striving for self-improvement.

“During Ramadan, it’s not just a time where you persevere,” Hakki said. “It’s also a month where you better yourself not only for that month but also for the rest of your life.”

Celebrating this religious period of fasting does not only take place in the United States but also in Ramadan’s birthplace: Saudi Arabia. However, unlike Muslims in America who must adapt to the challenges of getting through a full school day while fasting, Saudi Arabia allows some more leeway, shortening work and school days to give time to rest for those fasting.

“I used to live in Saudi Arabia,” Hakki said. “A lot of the schools wouldn’t have school during that time, or for the school that I went to, we would have shorter days. My dad would also work a shorter day and he would get off earlier. And a lot of the things, like doctor visits, would be canceled.”

Although a big change from last year’s Ramadan where a year of virtual learning allowed for more rest at home, fasting this year in person has been relatively easy for Muslim students; for Elkousy, it has allowed more time to complete schoolwork.

“I just kind of skipped lunch,” Elkousy said. “Ramadan is my most productive time of year because I schedule my meals — I just do a bunch of homework all day long. I just kind of focus since I have nothing else to do. I can’t snack or drink, so there’s nothing to distract me.

Like Elkousy, Shabanova has also noticed the change in her habits during Ramadan over the years of fasting and has made the most out of it.

“The thing I figured out all these years of fasting is I eat because I’m bored,” Shabanova said. “I get bored and I just eat. It’s not really that I’m hungry. There’ll just be times when I’ll be at home and I’m bored, and I want to eat.”

Though Muslim students, like Elkousy and Shabanova, grow more focused during Ramadan, the time commitment needed for the religious actions performed with fasting, like prayers, reading the Quran and going to the mosque, remains a challenge for Abdullatif.

“During Ramadan, more rewards are given for the good that you do, so it’s recommended to pray every single night at the mosque,” Abdullatif said. “That’s a little bit of a challenge with school because of all the work and especially AP exams coming up.”

Abdullatif said that the fasting incurs fatigue, but for the most part, doesn’t hinder his ability to play sports or bike to school. Regardless, when it comes to sports, Muslim athletes are forced to balance their dedication and love of sports while enduring hunger and fatigue while fasting.

“I did track during Ramadan,” Shabanova said. “It was a big struggle. During practice, I would be exhausted, and then I would go straight to bed and go to sleep. During track meets it would be even worse because all I could think about after finishing the race was water.”

Elkousy, who started fasting since elementary school, said he has gotten used to the daily pangs of hunger over the years, but still encounters challenges with fasting while fencing.

“For me, the main challenge is water because I still go to fencing practices,” Elkousy, who is a nationally ranked fencer, said. “So, I’ll lose like a couple of pounds of water weight and have to make it all up at the end of the day.”

Shabanova said that one of the hardest aspects of Ramadan is attending school with students who do not fast.

“During lunch, I smell the food and I really do want to eat it, but you have got to have the mindset to not do anything,” Shabanova said. “I just ask my friends how it tastes and to describe it to me and I’ll be full.”

Even though this is a worldwide event, Abdullatif said that every person finds their special meaning when fasting during Ramadan.

“It’s a holy month; it’s not only about not eating, but it’s also about becoming a better person,” Abdullatif said. “You’re supposed to follow the Quran and not do any bad deeds your whole life. But, during Ramadan, doing the bad deeds is, I’d say, worse in this month than any other time because it only comes once a year.”

Not only do Muslims regard Ramadan as a time-valued tradition, but for many Muslims like Hakki, it has become a part of their identity.

“It’s something that you’ve been doing every year, so you’re accustomed to it,” Hakki said. “But, it’s also more of a connection with yourself because you are doing it, mentally preparing for it and making yourself better throughout it.”

The ending of Ramadan signifies an accomplishment and moment of celebration for every person that fasted this month and highlights how anyone can do anything that they put their mind to.

“Yeah, it really does teach you that when you have a goal you just kind of push through and set your mind on something and never give up even if it gets hard,” Elkousy said.

After the last day of Ramadan, Muslims celebrate its ending with Eid al-Fitr—the “festival of breaking the fast”—which begins with communal prayers at daybreak. During these three days of festivities, participants gather to pray, eat, exchange gifts and pay their respects to deceased relatives. Some cities, like Istanbul, Cairo and Delhi, host carnivals and large prayer gatherings.

“It starts with an extra prayer called the Eid prayer,” Abdullatif said. “We go to the mosque early in the morning. Then, there’s a tradition where family members give the kids money, sort of like Chinese New Year. It’s about giving gifts and celebrating with your family.”

But no matter what observers have planned for their traditional suhoor and iftar gatherings this year, the spirit of this centuries-old tradition remains the same as a time for piety and self-reflection, according to Abdullatif.

“It’s because of the fact that Ramadan is hard that you just rejoice and feel happiness,” Abdullatif said. “At the end of the day, it’s because you’re celebrating it, not being forced to do it. And, it’s something good in life. It’s not a burden.”