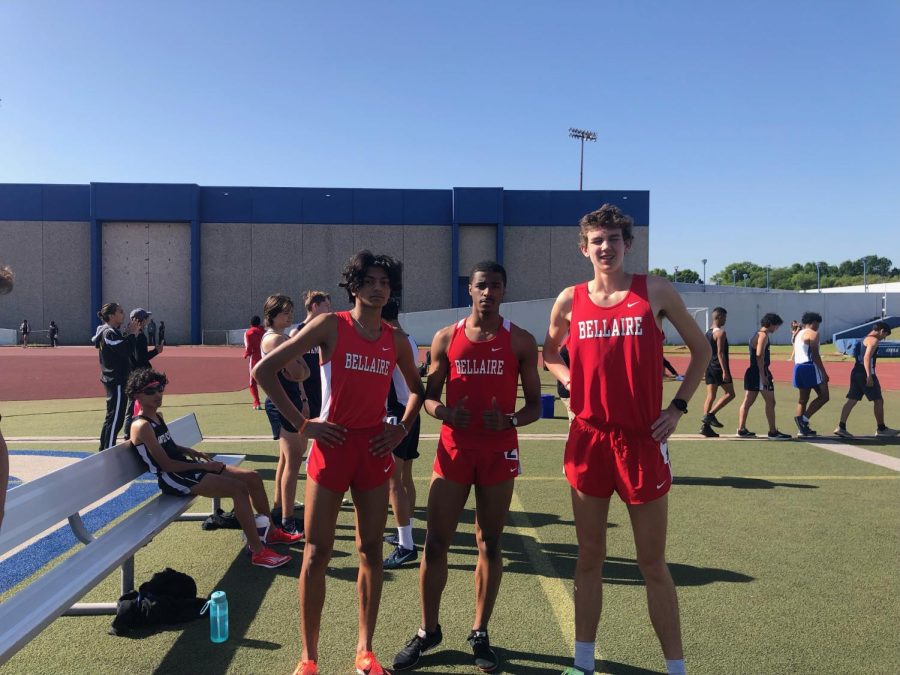 (From left) Junior Zain Hamdani, junior Nasir Starks and senior Dylan Ballard at districts. This is Ballard’s last meet with his team from Bellaire, but he said he plans to continue running in college.

Running toward a college dream

Everything has led up to this. The pressure to run a mile and race across the finish line in less than 4:20 is coursing through the 6 foot 8 inch senior track star’s body. He’s dressed like he usually has for the past four years – red speed suit with the Bellaire logo in front, short shorts with size 14 orange and blue Nikes – as he positions himself on the starting block.

He’s ready, though, because he’s done this before. Long nights and early mornings have helped Dylan Ballard prepare for the final race of his high school career, the district meet in April, as well as the many years of dedication to improving his mile times. For Ballard, the goal isn’t just to push his body for 4:20 to win Bellaire a medal – it’s also to win a spot on a college track team.

His stock was rising one race after the other, as personal records were being broken. Colleges took note of his talent, including schools from NAIA, Division III and Division II. Nevertheless, Ballard knew where he wanted to go: a Division I college.

“I did have interest from those schools, and I actually applied to Colorado School of Mines; but I really was keeping my hopes up for a Division I school before I accepted anything from Division II or III,” Ballard said.

No less than a couple of months later, the process had slowed down. The decision was strongly leaning toward his mom’s alma mater, Texas A&M University.

“I had interest in A&M because of its athletics and engineering program,” Ballard said. “Plus, I was already accepted in, so it was the ideal choice at the time.”

However, his pre-college journey was all but finished. Before Ballard could notify the school about his mutual interest, a letter in the mail arrived stating that he was accepted into Vanderbilt University. This time, though, Ballard didn’t even have to think twice. He acknowledged the acceptance letter.

“I was doing some research during this process, and I quickly realized that a lot of things I was looking for in an ideal university were present at Vanderbilt in Tennessee,” Ballard said. “I applied to Vanderbilt alongside A&M, and if I didn’t get accepted there, I would’ve easily gone to College Station. I toured there and got to speak to the coach before I applied, which was awesome, and thankfully, I got accepted. That was my dream school.”

But for now, Ballard has to focus on the race ahead of him. His heart is racing. His anxiety is reaching a boiling point – as the bang from the starter gun rings in his ears. All of the sudden, the race is on, not just to cross the finish line in high school for the final time, but also to find his way to  the next level.

Because Vanderbilt doesn’t offer scholarships to high school runners, walking on is the present reality for the track and cross country athlete. Regardless – scholarship or not, Ballard isn’t worried about the future; he’s already planning ahead.

“We have a solid group of guys on the team,” Ballard said. “I know college is expensive, but I’m not really focused on that. My plan is to just continue working hard to go as far as I can go in this sport.”

Just a week later, Ballard is on Vanderbilt’s campus for a return visit. On the second floor of a small public building, he finds himself facing a mural of student names. He wants to leave a mark, so he takes a sharpie and begins writing his name. It’ll probably be overlooked by all of the others on the mural, but Ballard is beginning to leave his mark anyway, exactly how he wants it.