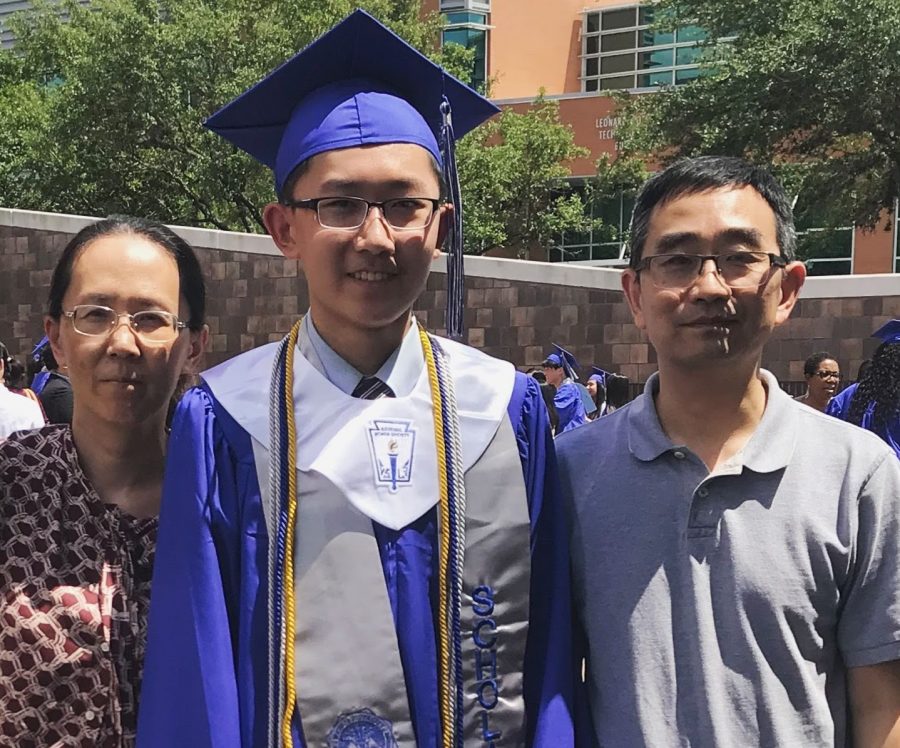 Xiaorong Wu (left) stands with her husband (right) at her son’s high school graduation. Seven years earlier, she was diagnosed with breast cancer.

Believe your body: my family’s experience with breast cancer

A mother of two steps into the shower. While rinsing her body, she feels a lump in her left breast. It’s small, no more than a few millimeters, but to her it is the biggest thing that has ever happened.

A few weeks later she sees an oncologist who tells her that there’s nothing to worry about. She’s cancer-free. There was no way she could’ve predicted the curveball that was in store.

I was 5 when my mom was diagnosed with breast cancer. I didn’t fully know what that meant at the time, but I knew that the mother I had before cancer was gone.

A few days later, my dad sat me down and said, “You have to be on your best behavior from now on. OK? Your mother can’t handle any more stress right now.”

I was lost. Her home-cooked meals that I had craved every night were becoming increasingly scarce. She spent more and more time in her bedroom with the door shut. At the dinner table we ate Chinese takeout in silence without her.

Then her hair started falling out.

I remember one day my family went shopping at the mall. My mom got tired and had to sit down on a department store couch.

“Alexa, come here,” my mom said. “Stand behind me and brush off all the fallen strands of hair on my neck.”

I tried to brush the fallen hairs off as delicately as I could, but I accidentally pulled some hairs off her head. It startled me, I was scared by how fragile she seemed.

Eventually, my mother decided to shave her head. Newspapers covered the living room floor as my mom sat in the middle. My dad held the electric razor and buzzed her hair in silence. Nobody knew what to say.

Not long after, my mom told me that she might die soon. It was right after she had surgery to remove the peanut-sized tumor in her breast. She was lying in bed, a barf bag on her nightstand, ready to be used at any time. At that moment, my mom thought she was a goner.

My mom survived. She beat cancer in 2012, but to this day, she is still scared it may return. Whenever my mom feels stressed, her scar hurts. She rests her hand over the scar, as if to protect the area from another invasion.

Sadly, my mother’s experience doesn’t exist in a vacuum. Studies show that women are more likely to be misdiagnosed than men. Historically, medical studies have mainly been performed on men and sexist views of women have led to dismissal of female pain.

If you feel as if something is wrong, go to a professional. If they’re dismissing your concerns, get a second opinion. Don’t make the mistake that my mom did. It could cost you your life. Doctors aren’t God. They miss things. If you know something is wrong, keep on pushing until you get a diagnosis.

October is Breast Cancer Awareness month. If you want to help find a cure for breast cancer, consider participating in the yearly Komen Houston Race for the Cure. The money people pay to participate in the event goes to the M.D. Anderson Cancer Center which funds Breast Cancer research.

My dad has participated in the race every year for over 10 years. At the event, you will be able to hear the stories of survivors as well as meet the researchers working to find the cure.