Another bullet shot, another child taken: why I am scared for the future of education, and why you should be too 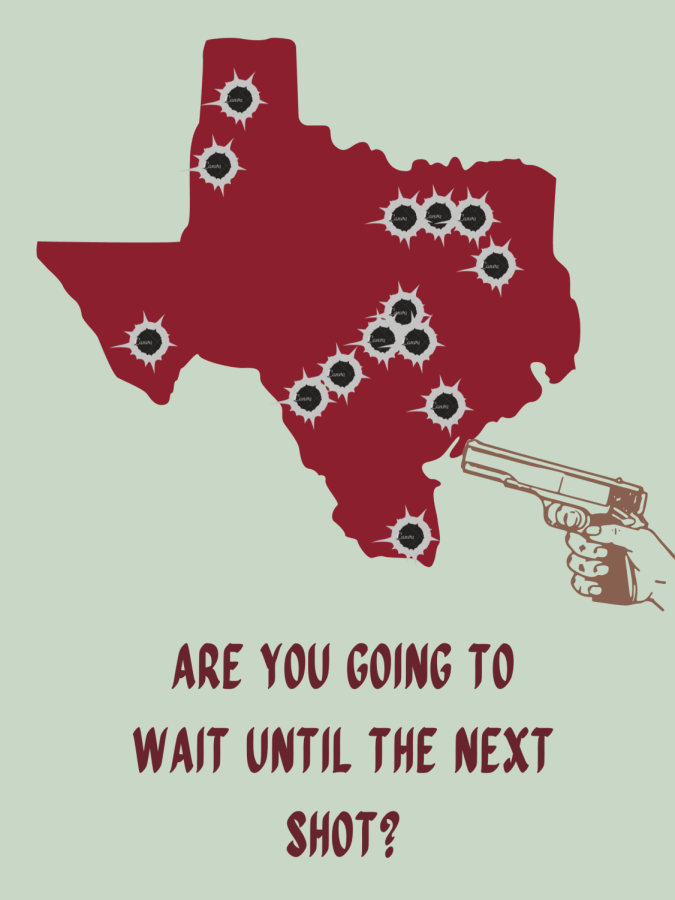 A graphic that depicts all the major school shootings that have taken place in Texas.

May 24, 2022 had been a good day for me until 5:13 p.m. The beginning of the day felt quite nice to be honest; I spoke, laughed, worked, had fun, and was greeted back with the nostalgic yet refreshing scent of home sweet home. I couldn’t have expected then, or anytime else, to be told what I had been only a few moments later.

At least 18 children and 3 adults had been killed in Robb Elementary School by a mass shooting that had occurred earlier in the day.

That was all I could get out of my mouth. A single word. A single question. You know, looking back, I think I should have asked more questions. How? Why? But none of it really matters. None of these questions have ever mattered.

They have been asked countless times over generations, by people who have been witnesses and victims of the inconsistencies and injustices of the American Idea of ‘law.’ Yet, it barely changes much, if anything at all.

It’s numbing to think that this has become normal.

It’s numbing to think that every time a tragedy like this occurs, it’s simply shrugged off and swept away from memory in the endless sea of tragedies that take place on a yearly basis. And it’s terrifying to even acknowledge, yet alone realize, that this won’t change anything.

It never has changed anything. Not when it happened here in our own school two years ago, and not even when the lives of children who are five to six years younger than me have been brutally taken away from the loving hands of their parents.

And I want to make something very clear before I go on: this is not professional, this is not a formal request, and it is most certainly not an overblown, intricate way of me trying to shed light on an issue that has plagued us and been known about for centuries.

This is a demand. And this is personal.

The right to bear arms is not the right to self defense. Especially not in this era of modern weaponry.

It is the right to reign terror and tragedy on unsuspecting individuals and families who had thought that today would be just like any other day. And considering that, the ability to take away the life of another, as the personal right of an individual is not only disturbing in and of itself, but makes me feel as though I’m living in an alternate dystopian society that accepts the act of murder and does nothing to change it.

In this year alone, there have been 27 school shootings that have taken place. And we aren’t even halfway through the year yet.

But no. We don’t change.

A day after this event took place, my English teacher, who had stayed resilient through the entirety of the pandemic school year, looked more concerned and disheartened than I had ever seen her in the two years that I was her student. And do you know the first thing she did before beginning class?

She apologized to us, for failing us, for this sense of normality that surrounds my generation despite everything that’s going on. None of which was even remotely her fault.

What rings undeniably true however is this sense of ‘normality’ that surrounds us. This feeling that we have watched the same tragedy occur time and time again. In fact, we have watched it so many times that we ourselves can no longer differentiate murder from a regular daily occurence.

These acts of violence have become so common, so normal, for us that we have become desensitized to the unspeakable loss of life that occurs in every one of these acts. A child just died. Died.

Do we even know what that word means anymore? Do we even think of the family
that just broke apart? What if the bullet goes through our heads next time? Would we even care?

The answer is yes. We would care. We do care. Knowingly or not, the fact of the matter is simple. None of us want to say goodbye too soon.

The current form of gun laws is direct violation of our public safety and health. They don’t protect, they create fear. And this fear is exactly what tears us apart from each other. It makes us doubt each other. It scares us. It divides us.

This needs to change. This must change. I don’t know who this article should be directed to. The government officials who come up with these laws, the older generation that constantly fights for change in this unwinnable battle of politics, or my generation that believes that they hold no power over the current state of the world. I don’t know.

So please, I ask you. Please, I demand you.

Don’t let this be another cry of terror in an endless vaccum of screams long gone. Don’t let this be just another tragedy that sinks into the bottomless sea of loss. Don’t just sit there. Please, prove to me that we are capable. That we feel. That we care. That we change.

Please, above all else, please, prove to me that you, that we, are still human.

Because I don’t know what I’m going to do if we aren’t.